For The Love Of Shakespeare by Beth Miller - Review 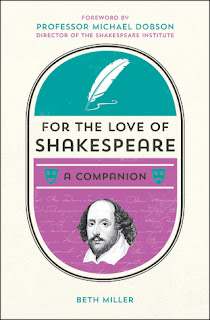 Towards the end of this year I have been in a mood for non-fiction so when I got the opportunity to read For The Love Of Shakespeare by Beth Miller, I jumped at the chance,

A treasure-trove of wit, imagination and emotion, his plays and poems continue to surprise, inspire, console and delight us. Whether you're a life-long lover of the Bard or a curious newcomer to his world, this companion will lift the curtain on the unforgettable characters and stories of Britain's greatest dramatist.

My original plan for reading this book as it is a non-fiction was to read a bit then put it down and just keep diving into it every now and again. This almost immediately went out the window and I ended up reading it cover to cover in two sittings as it was so clear and easy to read and extremely enjoyable as well as being informative.

I really loved how For The Love Of Shakespeare is organised, it makes it very easy for you to pick it up and find which bit you'd like to read. The first two sections are about Shakespeare himself and about Stratford Upon Avon and London in his time and then it moves onto his works which are split into The Comedies, The Histories, The Tragedies, The Apocryphal Plays and The Poetry. Each play is then broken down into plots, in a nutshell, other notable characters, body count, did you know and quotable lines. I absolutely love the in a nutshell section as it explains the plot of the play in very basic terms usually with quite a lot of wit!

The quotable lines bit is very good too as I could check out the famous lines I know and quite easily find out which play they are from. I know I keep saying and "this bit is good" but I really mean it, it's all just so good! I enjoyed the other notable characters sections as it highlighted some lesser recognised characters and explained the important things that they had done within the story.

Throughout the book there are mini interviews with people who are involved one way or another in the world of Shakespeare and the seem to be located close to their favourite play which is a nice touch. It was interesting to see how each person had grown to love Shakespeare and what experiences they had had.

Overall such a refreshingly light and still informative book and one I will happily keep on my bookshelves as it is also beautiful on the outside too. I have already recommended this to people I know and will continue to do so.

As part of my review I thought it would be fun to answer the questions that Beth Miller asked each of the people involved in the world of Shakespeare.

What was your switch-on moment?

I know it may seem silly, but I think watching Baz Luhrmann's 1996 film adaptation of Romeo and Juliet. I was the perfect age for this film (teenage girl+Leonardo Dicaprio=success) and it really spoke to me at that time and it made me think more about Shakespeare as being relevant now and not just as a study in my English classes.

Which is your favourite of Shakespeare's play?

My favourite play is A Midsummer Night's Dream, I love the fairies and I love the comedy which is not normally my thing.

Tell us about the most memorable performance you've seen?

It was of A Midsummer Night's Dream at The Burnley Mechanics and we were sat in a hall and the seats were in a circle with a space in the middle for the performance. It was so unlike anything I've seen before or since as it felt a lot more interactive as we were all on the same level as the actors, it felt like we were a part of the play.

Which Shakespeare character would you most like to meet?

I'd love to meet Titania, she is a great and complex character. As part of my theatre studies A-level I chose her as my research subject and I designed clothes for her and planned lighting, so I'd love to meet her and see what she thought of my choices.

How would you persuade somebody to give Shakespeare a chance?

I'd say watch a production first before attempting to read a play. Seeing something can really help you understand how a play is to be read and will help you become more immersed in the world and the characters. If you're not a fan of the theatre then there are plenty of film adaptations that you can choose from too. I'd love to visit the RSC Theatre in Stratford Upon Avon one day and watch a play there.
Posted by NerdishMum at 09:00