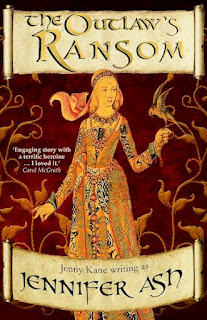 Today on Life Of A Nerdish Mum I am handing over the reigns to Jennifer Ash, author of The Outlaw's Ransom who is joining me as part of her blog tour.

Thank you for letting me visit your blog today to celebrate the release of my first medieval mystery, The Outlaw’s Ransom.
Many many years ago, long before those mobile phone things came along, and laptops were but a pipedream, I studied ‘Medieval English Economy and Crime’ at Leicester University. Basically, I spent five years in historian heaven researching the correlation between the political songs and ballads of the thirteenth and fourteenth centuries and the real criminal records of the day. I read a lot of Robin Hood stories and crime rolls! 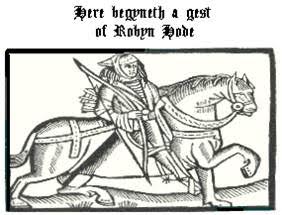 My research became a PhD, and since then I’ve I always wanted to use my work. To begin with I taught, but then my husband’s job was moved to Scotland, and as they don’t teach English Medieval history north of the border, my career was somewhat scuppered!

Now, 17 years later, after being a professional writer for 12 of those years, I have finally put my efforts and historical detective work to use in The Outlaw’s Ransom - my very first medieval mystery.

The Outlaw’s Ransom story revolves around the real life fourteenth century criminal gang, the Folvilles- the very gang I concentrated much of my doctoral research on. This family, made up of 7 brothers (John, Eustace, Richard, Robert, Thomas, Walter and Laurence), was based in Ashby-Folville in Leicestershire, but they ruled a larger area of the country, which included Rutland, Northamptonshire, and part of Derbyshire.
I must confess I rather enjoyed taking historical fact and giving it a fictional spin. Although The Outlaw’s Ransom contains many factual events- I have played fast and loose with history. Please don’t go using any of the information within its pages in a pub quiz without checking it out first!

Blurb
The first in an exciting new series by acclaimed author Jenny Kane writing as Jennifer Ash.
When craftsman’s daughter Mathilda is kidnapped by the notorious Folville brothers, as punishment for her father’s debts, she fears for her life.  Although of noble birth, the Folvilles are infamous throughout the county for disregarding the law – and for using any means necessary to deliver their brand of ‘justice’.
Mathilda must prove her worth to the Folvilles in order to win her freedom. To do so she must go against her instincts and, disguised as the paramour of the enigmatic Robert de Folville, undertake a mission that will take her far from home and put her life in the hands of a dangerous brigand – and that’s just the start of things…
A thrilling tale of medieval mystery and romance – and with a nod to the tales of Robin Hood – The Outlaw’s Ransom is perfect for fans of C.J. Sansom and Jean Plaidy.
***
Here’s a little taster for you.  In this snippet, Mathilda is about to learn what the Folville family wants from her…

Usually Mathilda bathed in the village ford, splashing about in an attempt to scrape off the flour, leaves, dirt and dust of daily life. Total immersion in a bath was a completely new experience for her.
When she’d been handed over to the austere female servant who’d been instructed to bathe her, Mathilda had been almost as frightened as when she’d been plucked from the cell to stand before the Folvilles.
Nothing that was happening to her made sense. Everything was changing so fast. Now she was being told to strip off her dirty, but familiar, clothes, and get into a wooden tub of water that steamed before the fire in a small room off the main hall.
Her fears, in this case at least, were unfounded. Plunged into the blissfully warm lavender-scented tub, the water unexpectedly soothed her undernourished body and eased her tense muscles. Mathilda sighed with the release of fear, even though she had no doubt it was only a temporary reprieve. While she immersed in that pool at least there was nothing she could do about anything except get clean. She found herself unexpectedly grateful for a period of forced inactivity, where she could neither receive instructions nor fruitlessly plot to run away.
I’m alive, she thought. And if, as Robert de Folville himself had told her, she’d been exchanged for a debt, then her family should also be alive and well enough to be able to work towards paying that debt off.
As the tight-lipped housekeeper undid the remaining ties of her hair, and washed out its knotted tresses Mathilda resolved to believe that her new master was basically kind. It was less frightening that way. If the opportunity arose for her to ask about her family again, then she would do just that.
‘Mathilda.’
Robert de Folville spoke sternly, and at once Mathilda could see why, unless you were very sure of yourself, it would be unwise to argue with his man.
It was as if he had two sides to him. A side that was never to be questioned, that was ruthless and determined, and a kinder side, considerate of the individual and, most of all, the locality. It was how these two halves mixed and intertwined that intrigued Mathilda as she stood shyly in only her chemise before him.
The housekeeper who’d bathed her had produced fresh clothes for Mathilda, and despite all her experience and sharp temper, had been unable to persuade the ransomed girl to put them on, claiming that enough had happened to her, and she wanted to keep her own clothes on, no matter how worn they were. Eventually the older woman threatened to fetch his lordship to dress her himself, whether Mathilda was naked or not, and with grinning determination had fetched Robert.
Mathilda had only had time to wrap her arms around her modesty before Robert came striding in, annoyed impatience across his face. ‘You will dress in these,’ he pointed to the remainder of the pile of semi-new clothes. ‘I can’t waste my time with things like this, girl.’
Shaking her head firmly, Mathilda braced herself as she risked provoking his temper. The housekeeper was looking expectantly at Folville, and Mathilda suspected if she was disappointed when Robert steadied his anger before speaking with deliberate clarity.
‘Mathilda, it is important that you temper that natural directness of yours, not to mention your boldness. Those are valuable skills, but I need you to hide them beneath style and grace.’ He pointed again to the garments laid out before them. ‘These clothes will help you give the impression we require you to portray. Your own clothes will be cleaned and returned to you when the job is done.’
‘You see my directness as a skill, my Lord?’
Robert almost smiled as he replied with exasperation, ‘Boldness, intelligence, directness and an uncanny knack of knowing what’s going on when you shouldn’t may well get you out of here alive. But overconfidence will not be your friend.’
Mathilda’s face flushed. ‘I am no scandalmonger, my Lord.’
‘I had not suggested such a thing. But as you prove to me once again, you are bold.’ He turned to the housekeeper, treating the older woman to the edge of his simmering anger, ‘Now, for the Lord’s sake, Sarah, get some clothes on her. She looks like a whore.’
With that he stalked out of the room. Red with embarrassment, Mathilda allowed the disgruntled servant to help her into the fresh clothes. Over the chemise, she was pushed into a tightly sleeved dress of light brown, and on top of that came a longer sleeveless surcoat in a fine blue wool, a little paler in shade than her temporary master’s cloak. Finally, a wide leather belt, with a plain circular clasp, was used to pull in and girdle her waist, and a pair of practical leather boots adorned her bruised feet.
Clothes such as these, Mathilda knew, placed her in the arena of those who worked for the rising gentry, rather than those who traded for a living. For the daughter of a potter who only just kept his family alive on his own tiny stretch of land, and his skill with clay, it was a major transformation.
***
I hope that’s whet your appetite!
You can buy The Outlaw's Ransom for your Kindle here -
https://www.amazon.co.uk/Outlaws-Ransom-Jennifer-Ash-ebook/dp/B01LZDKPQM/ref=sr_1_1?s=digital-text&ie=UTF8&qid=1475660907&sr=1-1&keywords=The+Outlaw%27s+Ransom+Jennifer+Ash
https://www.amazon.com/Outlaws-Ransom-Jennifer-Ash-ebook/dp/B01LZDKPQM/ref=sr_1_1?ie=UTF8&qid=1475660990&sr=8-1&keywords=The+Outlaw%27s+Ransom+Jennifer+Ash
Many thanks for letting me visit today.
Happy reading everyone,
Jennifer x 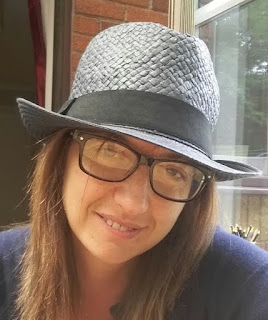 Bio-
Jennifer Ash is the author of the medieval murder mystery, The Outlaw’s Ransom (Dec, 2016). Her second novel, The Winter Outlaw, with be published in 2017.
You can find detail’s of Jennifer’s stories at www.jenniferash.co.uk
Jennifer also writes as Jenny Kane
Jenny Kane is the author the contemporary romance Another Glass of Champagne, (Accent Press, 2016),  Christmas at the Castle (Accent Press, 2015), the bestselling novel Abi’s House (Accent Press, 2015), the modern/medieval time slip novel Romancing Robin Hood (Accent Press, 2014), the bestselling novel Another Cup of Coffee (Accent Press, 2013), and its novella length sequels Another Cup of Christmas (Accent Press, 2013), and Christmas in the Cotswolds (Accent, 2014).
Jenny’s fifth full length romance novel, Abi’s Neighbour, will be published in June 2017.
Jenny is also the author of quirky children’s picture books There’s a Cow in the Flat (Hushpuppy, 2014) and Ben’s Biscuit Tin (Hushpuppy, 2015)
Keep your eye on Jenny’s blog at www.jennykane.co.uk for more details.
Twitter- @JennyKaneAuthor
Facebook - https://www.facebook.com/JennyKaneRomance?ref=hl

Don't forget to heck out the rest of the blog tour 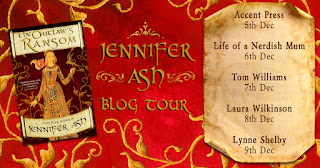