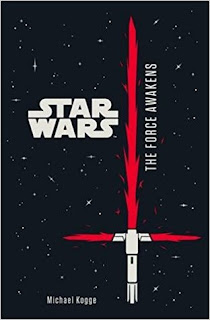 I have been on a major Star Wars kick recently (well more than usual anyway), I think after this review, I have another 3 or 4 Star Wars related books on my to review list! Before I get into my review though can we just appreciate the simplicity and beauty of that cover. Kylo Ren's lightsaber is my current favourite lightsaber, so to have it as the focus on the cover is perfect.

Luke Skywalker has vanished. In his absence, the sinister FIRST ORDER has risen from the ashes of the Empire and will not rest until Skywalker, the last Jedi, has been destroyed. With the support of the REPUBLIC, General Leia Organa leads a brave RESISTANCE. She is desperate to find her brother Luke and gain his help in restoring peace and justice to the galaxy. Leia has sent her most daring pilot on a secret mission to Jakku, where an old ally has discovered a clue to Luke's whereabouts...

This book does exactly what it says on the tin and is an accurate novelisation of The Force Awakens film. There are a couple of minor added scenes that helped pad out a few things, but nothing that was game changing. I particularly liked the added scene with Finn at the beginning giving him a bit more background and a reason why he was so important to Captain Phasma and Kylo Ren.

The writing was very good and though you can tell it is aimed at younger readers, the story and language used has not been babied. The only thing that did make me chuckle at one point was the line "Captain Phasma stood with a gaggle of generals...", gaggle seems such a funny word to use and to me lessened the importance of a group of high up military personnel. If the author didn't want to just use group, they could have used muster which would have fit far better.

I'm not going to say too much about the story as those of you who've seen the film know it anyway and those of you who haven't seen it but may want to, I'm not going to be the person who spoils it for you. The only thing that I want to mention is because I picked up on it in the book but not the film (so I totally need to watch it again for scientific purposes), when Rey and Finn met up with Han Solo and Chewie, they are asking if they were the ones that fought with the Jedi council and whether the force was real or not. Finn (in the book any way) seems surprised by it all, but surely he's aware of Kylo Ren's powers if nothing else? What does he think his powers are? Even if he only finds out about them on Jakku when Kylo does something pretty darn badass, he surely must think its the force? If you know or I've missed something in the book do let me know!

The story to me was just as good and as exciting as the film and I even cried at certain parts, even though I knew they were coming. In fact one bit I actually felt was even more emotional in the book than in the film which a pretty impressive feat.

Overall a really great novelisation of the film and one I really enjoyed.

Michael Kogge is an American screenwriter and author who has written for several Star Wars projects, including the Star Wars Adventure Journal, Star Wars Gamer magazine, Hyperspace, Star Wars Insider magazine, and the Star Wars: Edge of the Empire roleplaying game. He has also authored a series of Star Wars Rebels chapter books, adapting episodes from the show's first season.